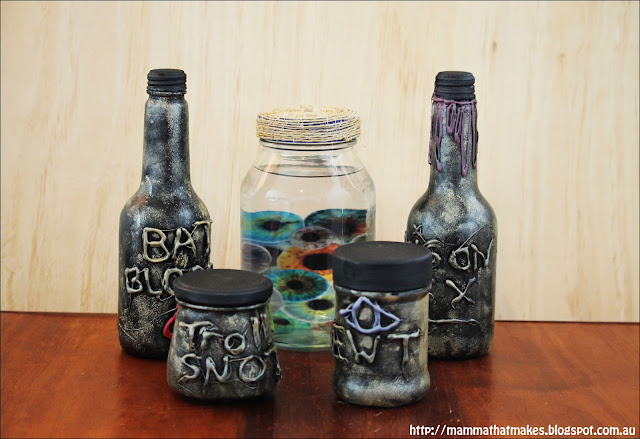 Yesterday I posted on my Facebook page asking if everyone would like to see the other crafty endeavours I get up to, and happily, the answer what an astounding and overwhelming YES!

So today I want to share some pieces I've been working on this week.

Halloween is coming, YAY! Here in Australia it is slowly gaining momentum. Last year we took the kids trick or treating and they had OODLES of fun. This year, I gave them the choice. We could go out again, or we could stay in, decorate and scare the pants off of everyone else.

Of course, the girls LOVED the idea of dressing up and decorating, so this year, we're staying in!

My girls are HUGE Five Nights At Freddys fans (horror game series) and originally we wanted to theme our area with that, but with so much else going on, I simply didn't have the hours or supplies to make what we wanted.

So instead we're opting for "Anything Creepy" I jumped on Pinterest to check out cheap and easy prop tutorials. Guys, there are thousands. Seriously. I think I got lost for a few hours in Pinterest. It's insane! I've pinned a bunch to work through for the next few weeks, so we'll see how they go!

Today Im sharing with you our spooky jars. These are upcycled, which is also right up my alley, and super cheap to make, another winner! In fact, I had everything I needed already! YAY for cheap crafts! 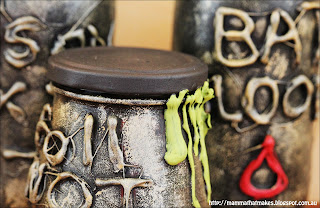 I used tutorials by Magia Mia and Fynes Designs for the jars. Of course, I didn't follow exact. I never do!

The eyeballs in a jar was super easy. Ridiculously easy! I used an old mayonnaise jar for this one. Then it was simply a case of printing out some eyeballs from Google, cutting them out and Modge Podging them to the back of the jar, with the coloured side down (so you can see it "inside" the jar). The lid was just some old twine I had laying about and a hot glue gun to attach. Fill it with water and your done! Not counting the drying time (because I let it sit overnight to fully dry) this jar took me less than 10 minutes to complete. Told you it was easy peasy! 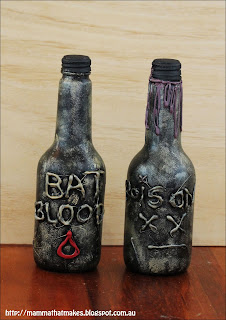 The solid jars took a little longer, because I had to wait for drying time. But aside from that they were again very simple. The hardest part was picking my "ingredients" We opted for Bats Blood, Eye of Newt, Poison and everyone's favourite, Troll Snot! To be honest, the troll snot is my fav one ;) 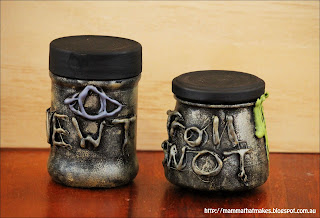 For these I started off by using my glue gun to write the words and draw the images onto the bottles. I did one layer, then let dry and did a second. I wanted the words very raised. For the poison bottle I added some drips with the hot glue, and likewise with the troll snot, some glue bubbling out the side. Don't worry about the stringy bits of glue that go everywhere, it adds to the charm!

From there I gave all 4 a coat of black chalkboard paint, but I wasn't impressed with the coverage so once dry I did a second coat. Then when that dried I mixed some silver paint with an orangy/rust colour and sponged it over the entire area. Then with a fine brush I went back in to do the coloured details.

That's it! Super easy and very effective. My poison and bats blood bottles were originally wild turkey bottles, the troll snot was a jam jar and the eye of newt? That one was an empty spice jar! I was super lazy and didn't peel off the labels either, just gave them a wash and went with it.

So there you go, the start to what Im sure will be our ever growing Halloween prop collection! 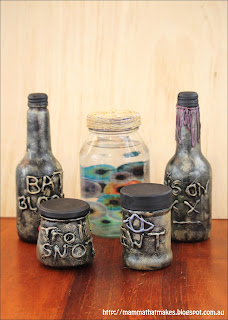 Posted by Mamma That Makes at 10:40 AM 2 comments: Links to this post

Donations are used to purchase supplies, which in turn are used to design more patterns and tutorials and freebies.
I am also happy to accept donations of items, please email me at myshellecole@gmail.com to get a postal address. Please be aware I live in Australia. I am happy to review your items also.

Are you a member of Ravelry? Why not add some pictures of your finished items!
You can find all my designs on Ravelry here http://www.ravelry.com/designers/myshelle-cole
All my patterns are written in AMERICAN terms. If you need help translating that to UK terms please leave a comment.
TERMS OF USE:
All of my patterns are free to use. You can sell what you make.
You may NOT redistribute any of my patterns in part or in whole.
This means you can not email the patterns, upload them anywhere on the Internet or re-blog them. I take issues of theft seriously and anyone found redistributing my patterns will have legal action taken.
You CAN link to the patterns, and if you are linking to them, I am more then happy for you to use one of the photographs that corresponds with the pattern itself.
You are also welcome to print the patterns out for personal use.
Credit where Credit is due
Everything on my blog is offered for use, however I am a firm believer of credit where credit is due.
Please don't pass something from this blog off as your own work. That's not cool.