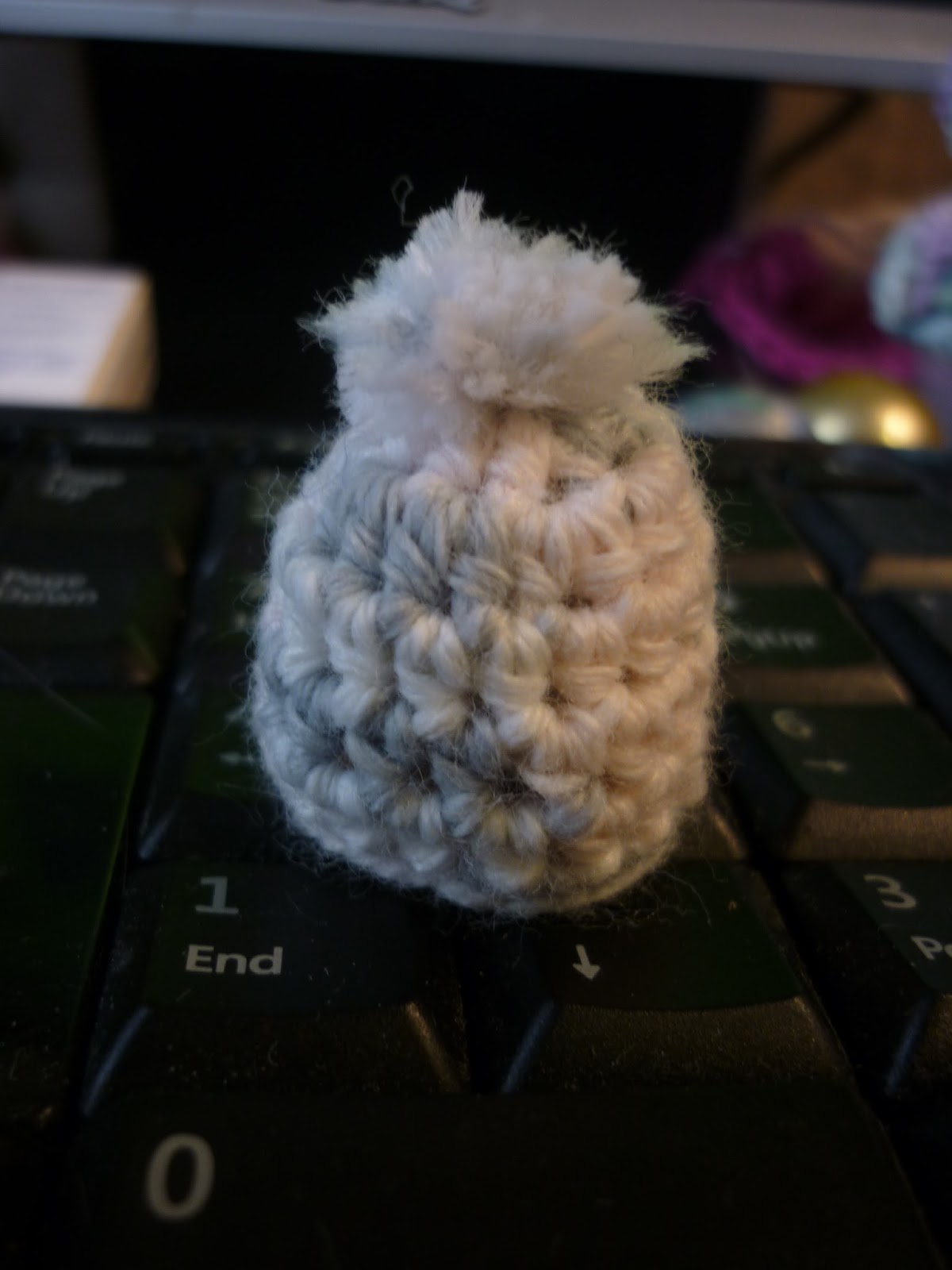 Today's post, and pattern, are both equally hard to write. I know that for some, this will be a hard read. For that reason alone, Ill be posting the pattern first. I understand if you don't wish to read on, but I am equally thankful for anyone that does. This hat, is not for a baby to wear, but more as a keepsake, an acknowledgement, a comfort. 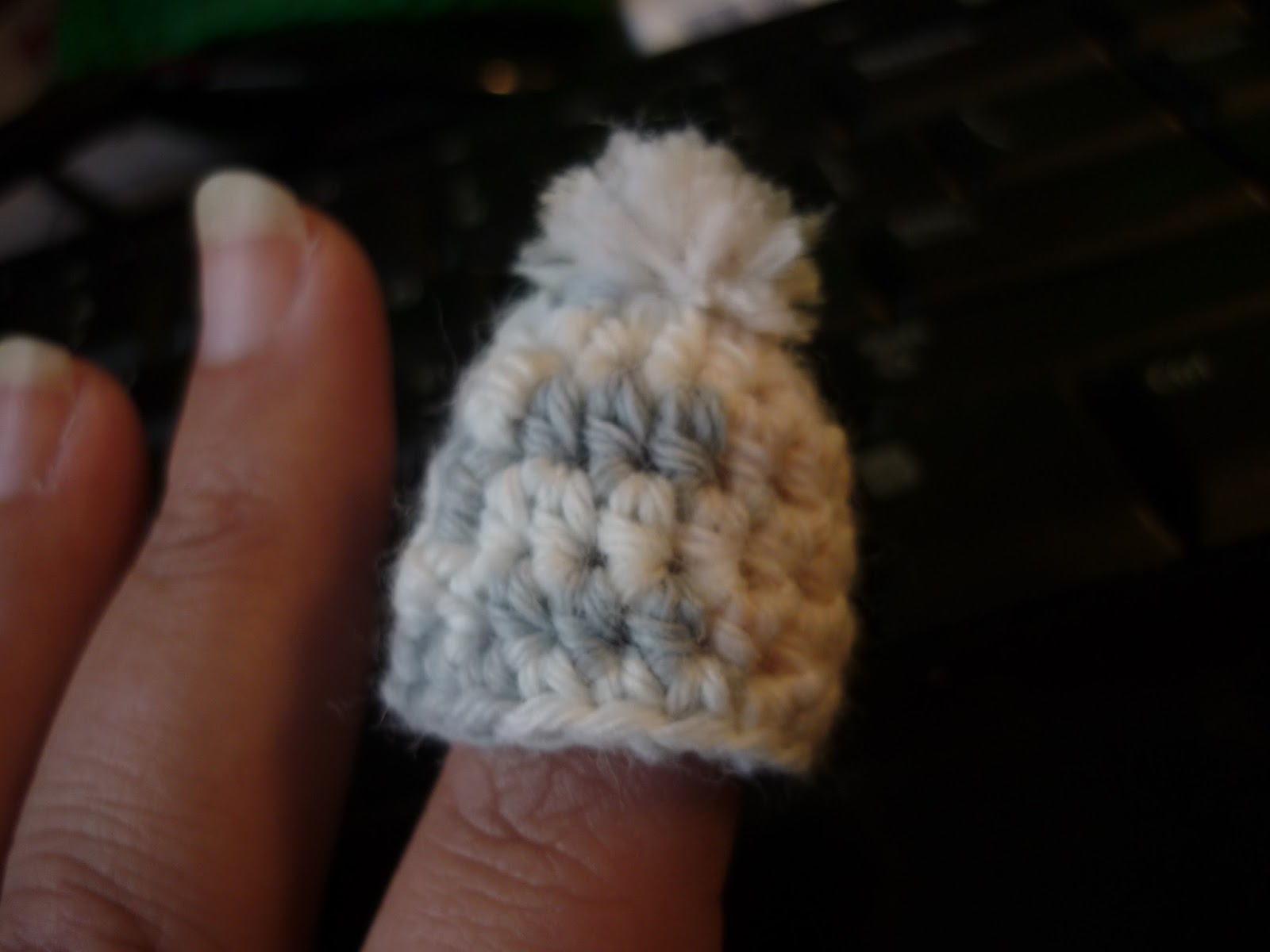 Make a very small pompom and attach to the top.

I know you are probably looking at this hat and wondering why on earth would there ever be a need for such a tiny tiny hat. A hat that fits on the tip of a womans finger. Why?

Well, let me tell you.
3 weeks ago, I pee'd on a stick and that stick told me TADAA you are having a baby! After a long time of trying, it was a moment of excitement, of joy, of happy. A dream of future things and little smiles and tiny toes to blow raspberries on. Quickly, take another test! We have to make sure this is right! 3 sticks and a blood test later, and we'd confirmed that we were indeed having a baby! We nicknamed it Frankie. We told very few people, we wanted to wait a little.

2 weeks ago, the dreams were pushed to the backburner as anxiety set in and I started with some light spotting. No worries, Im thinking. A lot of women spot, some even have entire periods while pregnant! I can deal with this. The next day it was a little heavier, and I decided ok, gotta go get this checked out.
After a lengthy ER visit with my bestie, I had bloods done and a scan and discovered I was 5 weeks, 2 days along and my tiny little Frankie, was in a little itty sack all of 5cm.
Go home, they said. Take it easy. We wont know much but you know a lot of women do spot, if you get crampy or pass clots come back.

On Monday this week, at 6 weeks, 1 day, I sat again in the ER awaiting blood results.

I became a member of a community that to date, Id only supported.

The lady doctor who'd been treating me walks over to where I am sitting in a crowded waiting room. I knew, I knew the second she came over. Every other person was just called out to, and they stood and went. No, she walked over, clipboard in hand. She says to me "Would you like the results here or do you wish to go to elsewhere?"
I knew. I knew and I was angry. Angry that she had thought that it was an ok thing to break the news that my little baby was gone in a packed waiting room. Packed, as in, no sitting room wall to wall people wedged in like sardines. How the heck did she think that was an ok thing to ask?

So I reply with "Id like to go somewhere else, obviously!"

No, we didn't get lead to a room. We got led to a seat at a table in the kiosk, and there she told me that unfortunately it was not good news, my hormone levels were dropping and that there would be no baby.
I'd knew, Id guessed and now Id had confirmation. I wont say I took it ok, I bawled, and I sobbed, and I had the whole snot running down your face thing going on and she just sat there not saying a word.
Once I manage to regain some sort of composure she tells me "It was so early that you wont need any procedure. Go home, let nature take its course, go see your GP in 2-3 days" and with that she stood, shuffled her papers on her clipboard and left.

No time to ask questions. No support. No anything.
In a cruel twist of irony Id left that hospital in the one way Ive spent the last 2 years working against. Empty. With empty hands and an empty heart. I wasn't even offered a flier on grief, or a support group. Nothing.

Its hard to know what to write. I lost Frankie. We lost Frankie. Frankie had passed on. Nothing really sounds right, nothing made sense. What I do know, is I have not lost my fight to change the way early loss and loss in general is dealt with. For a brief moment, I had a baby. It was real, it was there. It was tiny and loved and so very wanted from the very second that line turned blue, it was wanted. Noone has the right to dismiss that like it is nothing and noone, noone ever, should leave the hospital empty handed. I can promise you, I will fight like heck to change that!
Posted by Mamma That Makes at 4:42 PM

Donations are used to purchase supplies, which in turn are used to design more patterns and tutorials and freebies.
I am also happy to accept donations of items, please email me at myshellecole@gmail.com to get a postal address. Please be aware I live in Australia. I am happy to review your items also.

Are you a member of Ravelry? Why not add some pictures of your finished items!
You can find all my designs on Ravelry here http://www.ravelry.com/designers/myshelle-cole
All my patterns are written in AMERICAN terms. If you need help translating that to UK terms please leave a comment.
TERMS OF USE:
All of my patterns are free to use. You can sell what you make.
You may NOT redistribute any of my patterns in part or in whole.
This means you can not email the patterns, upload them anywhere on the Internet or re-blog them. I take issues of theft seriously and anyone found redistributing my patterns will have legal action taken.
You CAN link to the patterns, and if you are linking to them, I am more then happy for you to use one of the photographs that corresponds with the pattern itself.
You are also welcome to print the patterns out for personal use.
Credit where Credit is due
Everything on my blog is offered for use, however I am a firm believer of credit where credit is due.
Please don't pass something from this blog off as your own work. That's not cool.